Running is one of the best ways that people can get in their necessary aerobic activity, but it also does a number on the knees. Without a proper shoe to absorb the ground impacts that travel up the leg during running, there’s little chance that someone with bad knees could keep it up for any amount of time.

With the proper shoe, however, many runners are capable of keeping up with their running routine, even if their knees are less than enthusiastic about the prospect. It’s the reason why we’ve decided to review the best running shoes for bad knees. Thanks to the following shoes, few people will have to abandon their running routine due to their knees.

Although we have to admit that these brand new shoes from New Balance are more expensive than some of the comparable models, they are also the best running shoes for people with bad knees currently manufactured. They’re road running shoes that have the features that help them manage ground impacts and the way they travel up the runner’s leg. However, they’re capable of doing this without hampering the runner’s performance. In other words, they provide knee protection without hindering the runner’s pace.

One of the ways that shoes are capable of handling how ground impacts travel up the leg is by increasing the stack height of the shoes. That’s why these shoes have a stack height of approximately 30mm or about 1.18-inches. This is in line with other ASICS Nimbus 22 or the Adidas Ultraboost 20, although the feel of these shoes is firmer than those models. New Balance 1080v10 shoes also have a rocker design that these other shoes don’t have that allows the runner to maintain performance while the shoe essentially acts as a shock absorber.

These shoes also have a big wedge of Fresh Foam X for the midsole foam. One would think from looking at the midsole that it would get in the way of running, but nothing could be further from the truth. This addition of insulation allows the runner to knock down the miles with little to no effect on their calves or knees. This is accompanied by a knit upper construction that locks the runner’s foot firmly in place but doesn’t make the runner feel like their ankle movement is being restricted.

Taking all of this into consideration, it’s quite easy to see why so many runners love these shoes. Not only runners with knee problems but runners of all types. These are shoes that the runner could run a marathon in and still feel good the next day. Quite simply, they are some of the best running shoes around—regardless of the condition of the runner’s knees and that’s why we’re more than happy to recommend them to our readers.

Even though these Adidas Men’s Ultraboost 20 running shoes are most well known for their connection to NASA and the ISS, we’re going to put that aside and concentrate exclusively on the design of this shoe. As we reviewed it, we noticed that this shoe was capable of giving the runner something that few other shoes were capable of providing and that was a reduction of the vibrations that occur naturally from the foot hitting the ground while running.

These shoes provide an ample amount of rubber and is made out of the same material that tires are made from. That makes them extremely durable first and foremost, but it also means that they provide a bounce that feels good and is easy on the knees. The heel is also a little bit stiffer than other shoes, which doesn’t add to the shock-absorbing ability of these shoes but it does increase their durability.

What makes these shoes different than previous versions of the Adidas Ultraboost is their uppers. Their uppers are designed to provide the wearer with a tighter grip and this consequently gives the runner a little bit more control. Although the midsole is a little bit narrower, which may make it too tight for runners with wider feet, it does help to keep the foot locked into the shoe, which also helps to give the runner more traction. And this is also topped off by a neoprene collar that makes the shoe comfortable to wear.

Taking all of these shoe’s design features into consideration and giving them our own trial run, we know that these shoes are some of the best ones for runners with knee problems. They’re durable, provide excellent control, and are capable of absorbing the ground impacts of the foot hitting the ground. Think of them as shock absorbers and it’s easy to see why so many people are raving about these running shoes.

Even though some people may not like these shoes as much as newer versions produced by New Balance, we found it to be quite a good sure. It had a sock-lit fit that gripped the runner’s foot and provided them with the traction they need for long runs. It also had a Primeknit textile upper that gives the shoe a sock-like fit. This shoe is also manufactured with an Ortholite sock liner that’s very comfortable to wear, even though it does run a bit hot in warmer climates than other types of liners.

Where the rubber meets the road, however, is the midsole. This midsole gives the runner 20% more boost than conventional midsoles and that not only makes these shoes more comfortable to run in, but also helps protect the user from vibrations coming from the ground and up through their legs. Think of these midsoles as shock absorbers that dampen the impacts naturally caused by the physical activity of running and it’s easy to see why these shoes are well-liked.

These shoes are equipped with an 8mm midsole drop and a locked-in fit that increases the runner’s control. These shoes are also extremely good looking and provide the runner with a bit of style. They’re available in colors that include scarlet, blue/black, red, and black/white.

These shoes weigh approximately 9-ounces and are suitable for long-distance running, gym workouts, and cross-training. Although they don’t provide the speed that other shoes provide, they do provide the knee support that will help keep the runner running longer and with less pain.

It’s also should be stated that these shoes aren’t as expensive as some of the other shoes we’ve reviewed for runners with bad knees. That makes them a quality value-packed pair of shoes for anyone looking for a little bit more cushion in their step and are also looking for a very durable shoe.

A Guide To Buying Running Shoes For Bad Knees

When a runner feels like their knees are taking a hit, they not only want a pair of shoes that allow them to keep running, but they also want a pair of shoes that offer them a bit of relief. We know how difficult it can be to run when your knees aren’t on board with the plan, so we decided to give our readers the information they need to remedy the situation. We’ve created this guide—a guide that will help consumers buy the best running shoes for bad knees possible.

The first thing that the consumer is going to want to consider when they’re buying running shoes is how their feet strike the ground. When they run, do they have a neutral foot-strike pattern, or do they overpronate or underpronate? A neutral foot strike, also known as a proper foot strike, is when the foot hits on the outside of the heel and then moves up to the ball of the foot distributing pressure evenly. If the foot rolls too much to the outside, then that’s considered underpronation. If the foot rolls to much to the inside of the foot during a run, then that’s considered overpronation.

Of course, the only way for a person to determine whether they overpronate, underpronate, or have a neutral foot strike is to whether they have a low, normal or high arch. It’s best if this test is by a professional, but it can also be done by the runner doing what’s known as a wet test. The wet test is performed by the runner wetting both of their feet and then standing on a paper bag for approximately 10-12 seconds.

If the person has a normal arch, then they will have a curve along the inside of the foot with a 1/2-inch band that connects the heel to the toe. These people most likely have a neutral foot strike. If the imprint shows a noticeable curve on the inside of the foot and an extremely thin line connecting the toe and heel, then they most likely have a high-arch, which means that they probably overpronate. And finally, if the imprint shoes most of the foot without a curve, then they have a low arch. Runners with low arches tend to overpronate.

The next thing that the consumer is going to want to do is to find a well-cushioned shoe. This means finding a shoe with a minimum stack of 20mm and with a preferred foot stack of 30mm. When running, the foot stack of the outsole acts as a shock absorber, much the way that tires do for a vehicle. This will give the runner the cushion they need to properly absorb impacts from the foot striking the ground during runs.

Step Three: Get A Shoe With Extra Foot Support

One of the main causes of knee pain in runners is overpronation and this can occur even if the runner’s foot strike is neutral—if they’re using the wrong shoes. Running shoes that have little foot support can cause overpronation and this can lead to runner’s knee or other knee problems in runners. That’s why the runner should make sure that they find a shoe that has extra support to correct this situation and prevent excess stress on their knees.

Step Four: Choose A Shoe With A Good Upper Grip

It’s also important for the runner to find a shoe that has uppers that lock in the foot. When we use the term “locking-in,” we mean that the shoe should be a little tight on the foot to keep the foot from rolling too much. Of course, there is a fine difference between being locked in and being too tight, so the runner should make sure the uppers lock-in without being too tight on the upper portion of their foot.

Before we leave, we’d like to remind our readers that the laces on shoes are also extremely important and help to keep the foot locked into place. Although some articles on buying shoes that’s good for bad knees focus only on the above features we’ve already talked about, I think many of them are missing the opportunity to talk about how a good lacing system can mean the difference between a bad shoe and a good shoe. So it’s always important for the runner to keep their laces in mind when buying a new pair of shoes. 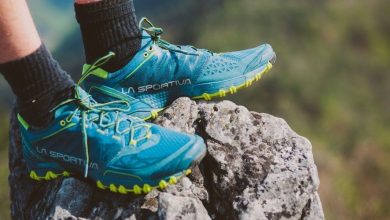 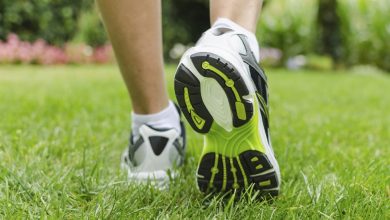 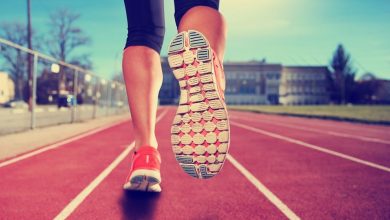 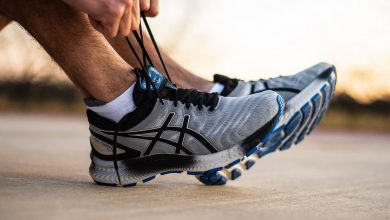